(the second in a short series)

It’s been a quarter of a year since I last turned white pixels black with the aim of getting some sense out of the ongoing EU referendum debate. In the intervening time, both sides of the debate have opted to abandon theatre and scaremongering, simply stating facts soberly, and with the barest minimum of interpretation, in order that the Great British Public can make an informed choice come June 23rd.

At this stage, most sensible humans have largely tuned the whole thing out – paying attention briefly to amusing asides like the chap failing to burn the EU flag. Or Bpoplive.

As each side describes the other as desperate… desperate… (it’s the insult du jour, folks – the worst thing is being seen as wanting to win so badly you tell your supporters what they want to hear, be it that Grandma needs to be put in a home or that it’s all a massive gubmint conspiracy) a cavalcade of desperate – in many senses – voices are wheeled out for our edification.

There are people in high places in Britain who believe in all seriousness that a word or two from popular crowdpleasers like George Osborne and Michael Gove would affect the thinking of the populace. There are those who consider Kate Hoey and Jeremy Corbyn compelling public speakers.

Any debate that pits Jeremy Clarkson against our own Donald-Trump-with-a-Latin-a-level man of the people Alexander Boris de Pfeffel Johnson should by rights be one to savour, but when something as compellingly awful as Boris’ various attempts at alternate future journalism are met with nary a shrug, we have to consider what else is going on.

The purpose of the Referendum, lest we forget, is to heal a decades-old rift in the Conservative party. Blue blood, blue Audi and blue rinse must come together as one.

And we already know it won’t work. The referendum has already failed before a single vote is cast.

Cameron has been promising a referendum for more than 10 years, both to fend off the forces of senile xenophobia in the form of UKIP and his own fractious backbenches – now it appears he’ll lose either way. Meanwhile the rest of the country looks on in an appalled fascination, contemplating arrant nonsense about either TTIP or mass immigration, depending on personal preference.

If you’d indulge me in a little critical theory, the various competing meta-narratives are only congruent in brief moments of intertextuality – with the sheer immanence of the spectacle itself a reflexive attempt to unify a fractured discourse. Or, as we say on Teesside: I canna be doin’ wi’ this bag o’ doyles, I swear down.

A wonderful survey by YouGov back in March demonstrated that it was possible to stereotype each voting tendency with a high degree of confidence.

If you are over 50, are of social groups C2,D and E, live in the Yorkshire, East Anglia or the West Midlands, have no formal education beyond the age of 16 – you are more likely to vote leave. Whereas if you are under 39, are of social groups A, B and C1, live in London, Scotland or Wales, have a university degree – you are more likely to vote remain.

One can, and nearly everyone does, read their own prejudices into these gaps. There are equally profound party splits, with Conservative and UKIP voters more likely to vote leave, and Green, Liberal Democrat, SNP and Labour supporters likely to vote remain.  (Incidentally, men and women are both split around equally on the subject) 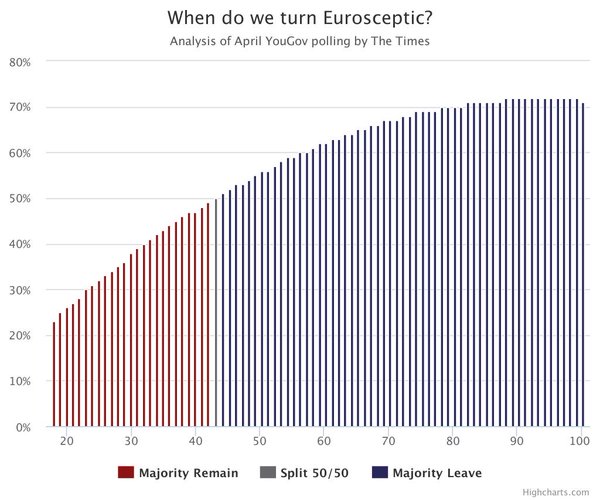 But though it is clearly an interesting survey and one worthy of further study, it has exacerbated the already deep split in the electorate. It is not one ideology about the world and Britain’s place in it against another, it has become the old versus the young, the rich versus the poor, the university graduate against the labourer. Dangerous stuff.

By now, even the most avid news-avoider must be aware that the £350million a week figure being bandied about by leave campaigners is nonsense – it’s the equivalent of saying that a pint costs £20 because that’s the size of the note you gave the barmaid, whilst ignoring the change that you get back and, indeed, the value of the beer alongside the other delights of the pub.

In gross terms we are talking about a membership fee of £250m/week. In net terms our national contribution is £120 million a week, including our rebate, other EU spending in the UK and the amount we count as part of our international aid spending.

Even this £120 million does not include any calculation of the other benefits we get from EU membership, such as an increase in foreign direct investment (the estimation made by the linked paper suggests that this outweighs the net membership costs by a factor of 10!) Or the savings that transnational companies make due to unified trading standards. Or… well, you can take it from here.

I don’t even want to talk about immigration at this point – it’s depressing.

I could write paragraphs on how much the NHS benefits from migration, how reliant many of our industries are on low-paid migrant labour, how economic migrants work hard doing the jobs we don’t want to or are unable to, from Professor of Theoretical Chemistry to central London barista, whilst paying by far more taxes than they ever receive in social security.

It would’t make the blindest bit of difference.

Neither would a few hundred words on the plight of Syrian refugees, asking little more than the right to live in a house that hasn’t been bombed – leaving the world they had built lives and families in with literally nothing, forced to start afresh, drawing on only the skills (often including fluent English) and determination they themselves offer. As boats began to attempt to land on the east coast, one of our most popular politicians was most scared of human corpses despoiling our beaches.

If you are voting to leave to stem the flow of immigration, you can be assured that it won’t work. Actually – if you are lucky, it won’t work… we need the skills of foreign nationals to manage our country.

This is only going to get worse. There will be more Brexit nonsense, and less decent reporting to make your mind up about. Here’s a few of my favourite academic (because most readers of this blog tend to be academics) sources of analysis:

The always excellent LSE blogs have a European Policy portal, which covers more of the soft social science end of the debate. CEPR run VoxEU, which is great for economic analysis. Oxford have an excellent international politics blog. Based at King’s College, the “UK in a Changing EU blog” is a fantastic initiative.  “The Conversation” have an EU referendum portal, and with the previous example this is generally an easier read though not always of the same high quality.