Just what is “Open Education”? How does it fit with everything else? This post is one of three exploring the same issue from the perspectives of Amber Thomas, Lawrie Phipps and myself (and hopefully, others…) as a part of Open Education Week. It is available for reuse under a CC attribution license. 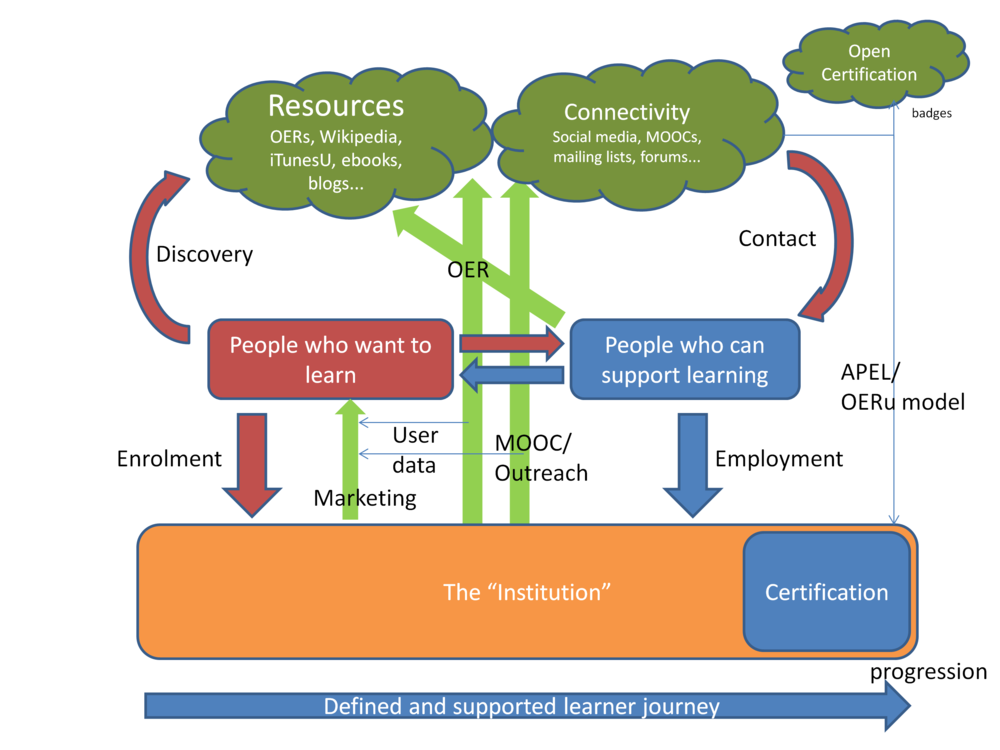 There are three things I really want people to take away from this very simple model.

In trying to capture education in any kind of systems model, I’m unavoidably going to end up modelling a significant chunk of what we might call modern human civilisation. I’d be getting in to fairly fundamental ideas about learning as a thing that we do every day rather than as a discrete activity. In short I’m going to overreach my understanding and end up looking rather silly.

The basis for my own mental model of learning and resource sharing comes from the English Folk Music tradition. It often suprises newcomers to this area of culture that there is no canon – no agreed set of tunes, songs, stories and dances. Instead there are numerous competing regional and cultural traditions, and there are variations even within these traditions

Writing about this in “English Folk-Song: Some Conclusions“, legendary collector Cecil Sharp suggested that “one man sings a song, and then others sing it after him, changing what they do not like”. Rob Young, who recently produced a beautifully written history of interest in the English folk music tradition called “Electric Eden“, explains the idea further:

“For [Cecil] Sharp, folk songs existed in constant transformation, a living example of an art form in a state of perpetual renewal […] Don’t seek the ‘original’ copy, insisted Sharp; focus on the transformations themselves – for they are the substance of the song”

As soon as we start to record and fix songs – even if we take great pains to capture every variation we have discovered, we have lost what has made them live. Derrida neatly encapsulates this idea as différance. In any written or recorded folk music the subject is indeed “not present”.

For me, the idea that one can learn any body of knowledge without knowingly or unknowingly altering it seems fundamentally improbable. And these alterations are not chance mutations, these are memetic improvements that are shared and disseminated – or discarded and lost. A history of knowledge would be a history of these refinements – their discovery, their use and their usurption. And without this movement – this story – knowledge is simply memorisation.

Our modern cultural preoccupation with measurement and accreditation of learning plays against this narrative flow. Too often, I think, we are more concerned with the mastery of a body of knowledge (as if it were static and could be memorised) rather than the way in which the act of learning moves knowledge onwards.

I’ve interpreted learning as a refining cycle, drawing on resources and on means of connecting to people. Whether this happens within or without an institution is immaterial, the proccess is the same. The institution is simply and at best a wonderful box to protect and nourish the mechanism. And if our strange and graceful machines can change the shape and nature of this box: allowing the contents to be more visible whilst retaining the resilience, so much the better.

An institution can also steer and nurture enthusiasm, there are many paths that have already been taken and guidance about this should be welcomed.  Because are our thoughts our own, or do they come from others? Clearly, the answer here is both – the limits of my reading do not halt my speculation, and my speculation often drives my reading. Surely, I quietly suspect, somebody else has thought about this stuff too?

At worst, the institiution is a codification engine, a printer of certificates showing that an approved course through the sum of human endeavor has been plotted and measured. The ability to convince others that you and your thoughts are worthy of attention is perhaps the greatest of social skills – the examination is a very poor proxy measure for this, and the database query is an even poorer proxy for the examination.

Open learning – as painful as it is that we even need these terms – is natural learning. Or even folk learning. It is our own entry into a tradition that lives longer than us, than our cities and countries, than our economies and values. And accreditation? – accreditation is very useful to us as individuals in the short term. It currently has an enormous economic and social value. It is a worthy investment for the present. But we should not pretend that it has anything much to do with learning.

I need hardly add – as it would be very clear to all intelligent readers – that these are my own views, and not those of my employers, colleagues or co-conspirators.