UNESCO is an unusual organisation with a a particularly unusual relationship with Britain.

We left, of course, in ’84, following the US out in an early War on Press Accountability which handily prefigured the results of the Leveson Inquiry. The “New World Communications and Information Order” (properly known as “Many Voices, One World“, sometimes the MacBride report) attempted to address the balance between the perspectives of the monied western mediarchy and those of the ordinary folks in the developing and developed world, and did so with the thoughtfulness and elan that you would expect from a group that originally boasted Marshall McLuhan amongst its members.

But clearly any idea that stops our noble news and media industry doing whatever the hell they want (as long as it pays) was an idea too far, especially to the Reagan and Thatcher administrations. Rather even than be party to a non-binding declaration, they walked, taking funding that had been used to preserve sites of global historical importance, for instance those in Iraq that they destroyed in 2004. The UK eventually crept back on board the UNESCO train with Blair in ’97, another of those far reaching events of the momentous first 100 days of Labour power. And, again, after the US (this time in order to lower our subs by a couple of £ billion).

The Paris UNESCO building itself is a venue designed for such deliberations. Huge hallways, armies of support staff, priceless artwork lining the walls and a (very good) restaurant on the 7th floor serving wine with a thoroughly decent lunch, it couldn’t be more colonial if it tried. From the balcony you look over the carefully maintained Ecole Miltarie to the familiar shape of the Eiffel tower; you see the European enlightenment and you see the Industrial Revolution – science, beauty, business and marketing, empire and military force. 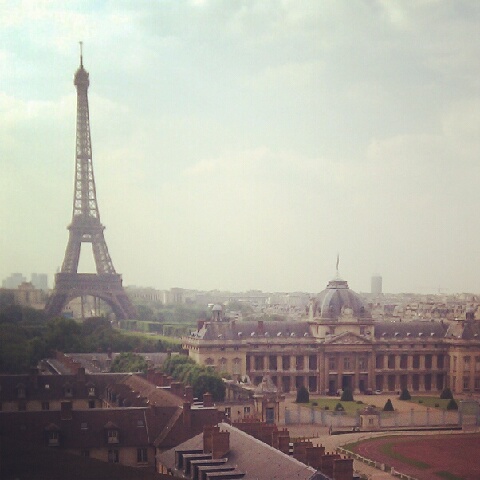 The OER declaration, newly signed into being last week, takes us back to a similar set of arguments to those that caused all that trouble nearly 30 years ago today. Are we in favour of corporations in the developed world seeing the developing world simply as a new market? Or are we looking to encourage and support new voices and structures growing indigenously around the world?

It’s a line that the OER movement has walked nervously, with the first rumble of concern being from Leigh Blackall over the cultural suppositions implicit within structured learning resources, usually at the low granularity end of the spectrum. But it is also a line that open-as-in-doorMOOCs seem still to pass without thought. One of the most common statistic-oids thrown into presentations was that to cater for projected global growth in HE enrolment, we’d need to build X campuses, holding Y students every Z weeks (the actual numbers here are extrapolations of guesswork and are entirely unimportant. The important thing is that they should be greeted with incredulity. That’s the pitch, see. The inevitable economic logic of OER.)

Clearly developing nations should be buying into experimental Western tuition models, rather than developing their own infrastructure and academic traditions. We don’t want them to become too competitive, after all. Why shouldn’t growing economies be building universities at such a rate? We’ve built a fair few during the 100-odd years we were a growing economy.

The language of the declaration (which, I should note, is non-binding on signatories) is very much “traditional OER”. The virtues of open access to knowledge, supporting the world. You know the deal. But everything in the surrounding seminar was OER plus. How can we offer accreditation, testing… to OER users. How can we make our materials more sticky, get more views, get more feedback (or “improve the experience”, as the pitch goes”).

Don’t get me wrong, to push OER to UNESCO declaration status is an incredible achievement – testament to the work of a small team based around Sir John Danielsof the Commonwealth of Learning. It remains to be seen what use is made of this opportunity – I know I’ve already benefited myself in being able to refer to a codified international policy statement around OER. But there again, I come from one of the great spiritual homes of Higher Education – I used it to prop up claims about the importance of the work I’m directly involved in.

For me the OERu undercurrent is a key indication of the way OER is moving, as my colleague Amber Thomas put it in an interview as part of the TOUCANS project led by Gabi Witthaus: “One of the things that annoyed me about the OERu was this pressure to join. That’s commissioning universities to join – saying we need specific stuff from you. That’s moving away from the talk about OERs being voluntary at the institutional level if doing that makes sense to you. If it’s about commissioning educational practices, I think it’s OK but I think you can extrapolate out of normal OER models too far. They’re sort of trading on the good will and momentum of OER under existing levels of release, and they’re saying if you don’t join in you’re a bit selfish. It’s the difference between sustainable development and commissioning.”

The OER declaration is a great opportunity to begin the growth of the next great wave of human thought. But if we just use it to take money out of developing countries in order to add another funding stream to support our institutions competing in an emerging market, it would be a profound loss.

Opinions expressed in this post are my own. Text available under a CC-BY license.