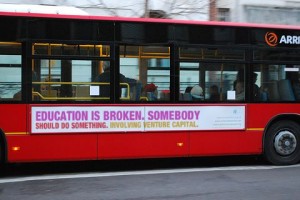 Increasingly, MOOCs seem like buses to me. Not because I wait for ages and then three million all turn up at once (though you can see why I might think it), but because they seem to be drawing us in to the first stages of the Higher Education Bus Wars.

Before the 26th October 1986, (when I was 8 and lived quite near Darlington) each local council in the UK ran its own bus service. Which you might think would be sensible, as it meant they could design services around local needs rather than profitability.

Alas the logic of the market prevails, with the 1985 Transport Act allowing pretty much anyone with a bus to start whatever-the-hell kind of commercial service they liked providing they gave 56 days notice.

This ushered in a glorious new era for the UK bus user.

What actually happened was that local councils had to spin off and sell their own bus services, which were largely bid for by the same five large companies. It was in their interest to reduce the value of these existing services, so they could buy the local company more cheaply or demolish it entirely to bring in their own services.

So to start with, residents saw loads more buses about the place. These new buses ran the same routes as the existing buses people were used to, but charged a fraction of the price (or were in some cases entirely free).

And who could be against cheap (or free) bus travel?

But eventually, the loss-making buses made the others on the route unviable. And then, with a monopoly in place, those prices rose sharply to the absolute maximum the market would bear. Local and smaller companies went to the wall.

The big five (Arriva, First, GoAhead, National Express, Stagecoach) then effectively carved up the country between them, with sporadic and limited local competition easily quashed. Prices rose sharply, passenger numbers fell and services outside of the profitable routes largely disappeared.

The problem was that local transport is basically a guaranteed income. People aren’t just going to stop needing to get around, and governments (even the right-wing fantasy ones) pretty much know that if you can’t move people between minimum wage jobs, expensive rented accommodation and shopping centres then the economy is stuffed. So there is money to be made, and a system has been designed that favours money making ability over actual ability to provide a service.

In the same way, no government is likely to stop supporting education. Even people who are solely concerned with making money admit that people need education. And that they can profit from both the results (educated people) and the process.

Now read the above again, but imagine that these new bus companies had somehow convinced existing and experienced bus drivers to drive their new, enormous and unwieldy vehicles (from which 90% of passengers fell and injured themselves on each journey) without wages.

And that these new buses were plastered in the logos of the old, trusted bus companies (who even paid for the privilege) , and accompanied by acres of uncritical news coverage and dubious quality testimonials about how a single free low-quality bus journey had changed peoples lives.

And that people tried to make existing companies feel old-fashioned for not having these new buses that were free to all passengers, even though the more experienced companies knew that it was a far worse service and completely unsustainable.

And that these new services were backed by limitless money, from huge publishers and venture capital, whilst existing services were squeezed again and again by their own funders.

Bonus video about bus wars in the south of england  from 1986 local TV.