Skip to content
Figured it was time I got some DS106 work up here, convincing myself and others that I’m not just at Camp Magic MacGuffin to play about building a British Embassy in Minecraft. Although fundamentally that is a large part of it…
First up: Lyric Typographic Poster (design assignment 529). I knew it had to be Eels, and I chose the opening lines from “Friendly Ghost” on Souljacker. People peg the Eels as a depressing band, but I think not.  The background texture is one of a load I downloaded for something else ages ago. 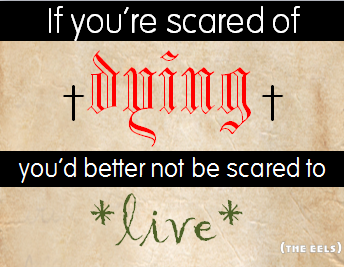 Next: Design an Invoice (design assignment 58) – described as “Create an invoice for a transaction that has happened in a film, TV series, etc”. I chose an invoice from Local Hero, one of those utterly wonderful early 80s Bill Forsyth films and quite possibly my favourite film of all time, ever*. It’s something I find myself coming back to again and again, especially at times when life seems less delightful. I’ve added some handwritten notes to preserve two lines of dialogue that need to be preserved, and I had to hand-create the logo in PowerPoint so have uploaded it as a PNG in case anyone else in the world needs to print out a Knox Industries logo and answer the phone with “Thank you for calling Knox Oil and Gas“.

Anyway, happy ds106 everyone. #4life
* seriously, watch it some time. Here’s the first bit on youtube.