Skip to content
I’m way of my depth here, but I was wondering how “average qualification on entry” data relates to some of the other aspects that the amazing UniStats data let me look at. You’ll remember earlier this week I examined the numbers of entrants with 340 points across various subjects, institutions and groupings. This time, I’m going to try to work in similar ways as prospective students might in choosing the “best” place to study (and this excuses my #statsfail I guess too…)  Just to give us a pool we can get our heads round, I decided to look at Social Sciences subjects only (Groups L and P in the JACS coding, so stuff like Economics, Politics, Sociology, Social Policy, Social Work, Anthropology, Social Geography, Media Studies, Publishing, Journalism). Social Sciences are interesting because they are mostly difficult to link to a specific job, but together constitute our understanding of the underpinning structures of western civilisation, and offer us ideas of what to do when it breaks.
Kids, study Social Sciences. The Social Sciences are way cool.
Anyway, based on the percentage of entrants on 340 UCAS points (AAB or equivalent), here are the top 10 places to do Social Sciences in the UK: Oxford, Cambridge, LSE, UCL, St Andrews, Warwick, Bath, Edinburgh, Durham, KCL, Exeter.
Pretty much as you’d expect, I guess.
Other measures below do not have complete data, but it is important to remember that this is the data this is out there – this is what entrants are using (or are encouraged to use) to make their choices. If, say, KCL hasn’t returned destination data in this area, why should anyone just assume it will be good. Informed consumers and all that. Let’s say a student was very keen to be actually working after they graduate, and wanted to choose an institution where many social sciences graduates actually reported that they were “working” after graduation. If we did that, the top 10 places to study Social Sciences in the UK are: Bath, Hull, Lancaster, Stirling, Glasgow, Birmingham, Liverpool, Sussex, Reading, Coventry, St Andrews. Of note in that little lot: Coventry. Only 11% of entrants have 340pts or above. And they are only charging £7,500…
Okay, getting more specific… let’s say you wanted to find work as a Public Service Professional. Sounds like a good thing to be, and according to UniStats is the modal job category destination of Social Science graduates. Your top 10 are:
Reading, Oxford Brookes, Strathclyde, Dundee, Royal Holloway, Bath, Birmingham, Stirling, Goldsmiths’, Lancaster, East Anglia.
So, the University of Bath has turned up in all three lists… otherwise this is pretty diverse recommendations for our student.
Final cut: what about teaching that really inspires?  National Student Survey Q3: “Staff are enthusiastic about what they are teaching.”. If I went to an open day, and met staff filled with passion and enthusiasm for “my” subject – that would sell an institution to me. The top 10 highest percentages of of graduates scoring this aspect as 5, “excellent”:
Winchester, Northumbria, Bath Spa, UC Plymouth, Goldsmiths’, KCL, Robert Gordon, Bournemouth, Royal Holloway, Loughborough, Buckinghamshire
Wow.
So – four different criteria, four different lists of recommendations. And there are thousands upon thousands of other criteria we could have chosen. But only the first is recognised as valid in the university funding method. Students are supposed to aspire to study at institutions in that first list, despite other institutions being “better” depending on your choice of criteria.
This strikes me as anti-competitive. It rewards inputs, not outputs. Would you choose a garage based on the quality of cars they serviced? Or how those cars drove afterwards?
Here’s a summary of the source data to play with on Google Docs, the full deal is yours to mangle over on unistats.
This post represents my personal opinions, and not those of my employers, projects, or programmes I am or have been responsible for. This post is available under a CC-BY license.
One of the only real innovations within the recent BIS White Paper on Higher Education was a relaxation of the student number cap for entrants scoring AAB (340 UCAS tariff points) or above. “This should allow greater competition for places on the more selective courses and create the opportunity for more students to go to their first choice institution if that university wishes to take them”, according to paragraph 4.19. But this flat language tells us very little about the kind of courses and the kind of institutions this would affect.
To get a better understanding of this, I’ve been playing with Unistats data, and have identified “areas of study” where the median entry qualification (that’s the “middle” of an imaginary ordered list of all entrant qualifications, stats n00bs) is at 340 UCAS points or above.
This approach showed that 422 institutional offerings across 21 (top level) areas of study in 52 English HE institutions had a median student offer of 340 points (AAB at A level) or above last year. Of these, 25 are medical courses and thus subject to student number controls. The remaining 397 are those most likely to be in a position to take additional students with AAB grades in 2012-13.
222 of these 397 courses are based in Russell Group affiliated universities, 151 in the 1994 group. 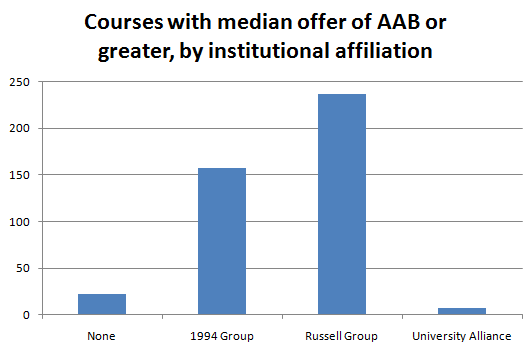 The University of Liverpool has 17 areas of study likely to be able to grow if AAB numbers are unrestricted, Nottingham, Leeds and Birmingham all have 16. Despite this, courses making AAB median offers are overwhelmingly based in the South East of England (74), and London (63). 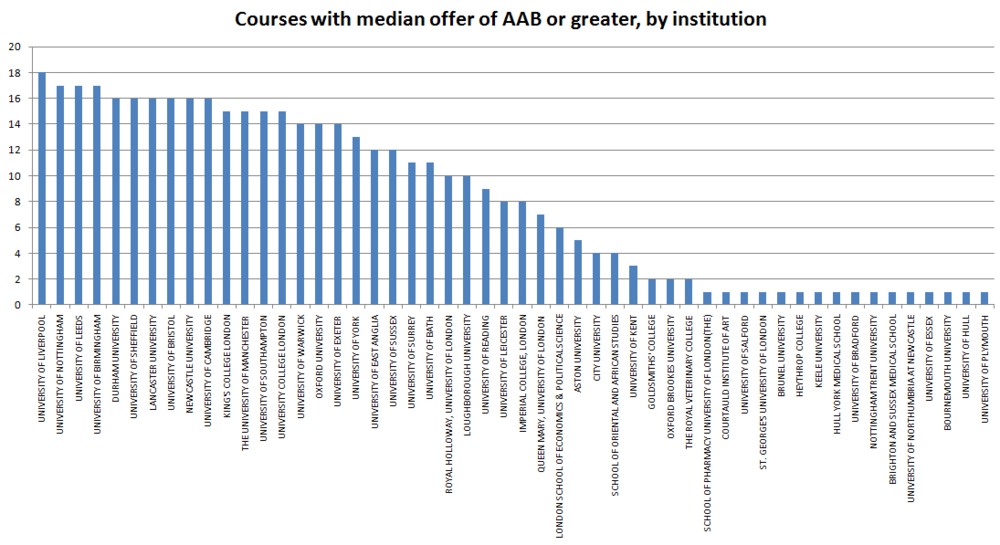 (note, the graph above includes medical course related data)
Law (34), Languages (30), Social Studies (29) and Biological Sciences (29) are the areas of study most likely to be able to expand via the increased intake of AAB students. 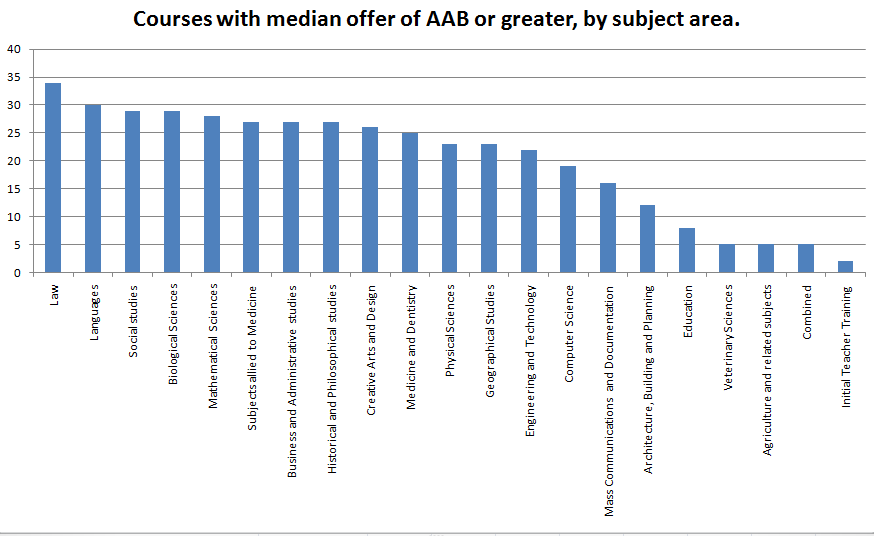 So what does this tell us? At the moment, no major surprises. It is, in fact, comforting to see Social Studies subjects likely to benefit from this policy, and pleasing to see a reasonable range of institutions in a position to recruit more students via this policy. But I’m sure there are more stories that can be told, and for that reason the data is available as a google spreadsheet for your analytical pleasure. (note, I only added coding regarding institutional affiliation and region to the courses I was interested in, so I have only shared that. The full data set (minus those two fields) is from Unistats. I used the year 1 figures to examine the most recent set of entrants)
Other interesting lines of enquiry may be:
(i) how satisfied are students with these courses? how does this satisfaction rate compare to all courses in these subject areas?
(ii) what jobs do graduates from these areas of study at these institutions go on to? Are these better or worse paid than jobs done by graduates from these areas of study in other institutions?
(iii) What fees are being charged by these institutions for courses in these areas of study?
This post represents my personal opinions, and not those of my employers, projects, or programmes I am or have been responsible for. This post is available under a CC-BY license.
Trial by fire will test our mettle, insist VCs. (The Times Higher, 30th June 2011) – We couldn’t read a headline like that without responding suitably, and with a respectful hat tip to Christopher Lee, Britt Ekland and Edward Woodward and all others involved in one of the greatest cult films ever. 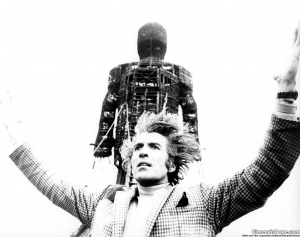 Paragraph 4.19:
“We propose to allow unrestrained recruitment of high achieving students, scoring the equivalent of AAB or above at A-Level. Core allocations [I assume this means allocated student numbers] for all institutions will be adjusted to remove these students. Institutions will then be free to recruit as many of these students as wish to come. Under the new funding arrangements, institutions may be eligible for HEFCE teaching grant for these students, for example those on high-cost courses, and the students will be able to access loans and grants. This should allow greater competition for places on the more selective courses and create the opportunity for more students to go to their first choice institution if that university wishes to take them. We estimate this will cover around 65,000 students in 2012/13.”

The key point here is if a University decides to recruit 50 extra AAB students to, say, a Pharmacy course this means HEFCE has to provide additional funding (you know, the one that used to be called “core funding”) for those 50 students. Don't believe that “may” nonsense, this is a requirement of the model, based around the assumption that lab and clinical sciences cost more to deliver and are of value to the nation. This grant availability could significantly affect the levels of funding that HEFCE would need to make available.
Imagine 50 extra medical students instead, and the exposure of HEFCE (and the NHS) rises further [EDIT: @amacgettigan and others have pointed me to footnote 49 which covers the limiting of medical student numbers] . Basically the extra AAB students only make sense in terms of government funding exposure for non-core funded subjects, not healthcare or lab stuff.

The “low cost” (under £7,500, so not “low cost” by any accepted meaning of the term) margin in para 4.21 at least has the opportunity for central targeting via “agreed critera” so would be able to avoid this issue. Many of us were expecting these two margins to be linked, thus driving down the prices of more popular courses. Apparently not. We've been over this issue before here and, though we applaud the reuse of policy that has actually been proven to work, sticking cost in here as a criteria only makes the whole thing dumber.
Really, paragraph 4.19, and the suggestion that this margin could be expanded downwards, contains nothing to prevent the slow emergence of a system offering only lab and clinical sciences courses priced at £9,000 to 'A'-level holders, which in terms of revenue generation would be the clear winner for institutions. I'm not convinced that this is the shape the sector wants to be in.
This post represents my personal opinions, and not those of current or former employers, projects, or programmes I am or have been responsible for. This post is available under a CC-BY license.