P.S: It also occurs to me that Screwtape would have made an excellent Programme Manager…

These are my views and not those of my employer, or of projects and programmes I am responsible for. This post is available under a creative commons CC-BY license.

There’s a new market price for learning resources. Free. So say (in the UK) the Guardian, the TES and now mobile network operator 02.

That’s free as in beer, which is substantially better than £30 for a textbook. Isn’t it?  For the uninterested end user (the same group who couldn’t care less that Wikipedia is mostly CC-BY-SA), yes. Unless they happen to feel that their personal information, contact details, browsing history and stated preference actually do have a market value beyond access to materials that are largely taxpayer funded anyway. Unless they want to use the resources in unexpected contexts, excerpt from them confidently and stay “legal” whilst doing so. Unless they have nagging suspicions that materials may be filtered, censored or altered by commercial entities who essentially see them as marketing tools. Unless they want to share materials they have found with colleagues and friends outside of the provisions of the provided service. Unless they don’t want to advertise the likes of O2 in their classroom, feeling perhaps that learning and the support of learning is not a branch of marketing or PR. Unless they happen to live or work outside of the UK, or whatever jurisdiction the material they want to use is available in. Unless they happen to think that maybe, the knowledge build up by centuries of human endeavour belongs to everyone and does not need to be commodified and marketised for consumption. This is the first great victory for free education. We’ve won – the open education, open everything, filthy-hippy team eduBeard have vanquished all before us. Yeah! We’ve broken publishing. The new model of knowledge sharing is here.

Now, do we need to get on and break marketing? Maybe take a few pot-shots at capital and the creation of value on the way?

Some would say that we don’t. If there is no “value” in openness other than availability, we’ve completed our job and got the achievement badge. You can now get to learning materials at no cost to the end user. Sure, you may need to sign in, sign over your most valuable commodity (your information), abide by arbitrary rules, and surrender any thoughts of ownership, personal control or even long-term availability of resources. But that might be OK. That might be enough. For those on the other side: You’re going to be unpopular. The “no cost” argument is a strong one, as is the “reputational benefit to the provider”. One has been lost entirely, the other needs some serious analysis. And some unattractive, almost counter-intuitive politics need to be communicated, jargon- and assumption- free, in an attractive way. Oh, and some of the best funded and most able marketing professionals will be ranged against you, as you attack the very basis of their value assumptions. It’s going to be trouble.

My wife (a huge inspiration both professionally and personally) shared the following quote from Hunter S Thompson with me recently:

“So we shall let the reader answer this question for himself: who is the happier man, he who has braved the storm of life and lived or he who has stayed securely on shore and merely existed?”

Because if this is what winning feels like, then I’ve been playing the wrong game.

These are my views and not those of my employer, or of projects and programmes I am responsible for. This post is available under a creative commons CC-BY license.
So David Wiley (@opencontent) has built up an extended riff about OER supporting learning being like giving away free toothbrushes to promote teeth cleaning. Brilliant. I love metaphors and analogy around the open education field, I suspect we simply don’t have the mental models and patterns that we need to get a feel from the opportunities and threats around open education – and stories or images are a really useful way of providing these, assuming that they describe situations that are analogous to the debate.
Imagine a programme to promote dental hygiene that involved giving away free toothbrushes. How could you measure the impact of the free toothbrushes on dental hygiene, as opposed to, say, toothbrush ownership? Don’t people need toothpaste, running water and a patient parental figure to remind them to do their edges? Therefore you can’t measure the impact and the impact is unlikely to be total or anything close to total, so giving away toothbrushes is a waste of time.
But what’s a better way to promote dental hygiene? A awareness-raising mass marketing campaign? Expensive, and less likely to work than giving away the toothbrushes (of course, giving away the toothbrushes is a mass marketing campaign, just one that actually gives people something useful rather than some glossy bits of paper.). Paying a dental nurse to stand next to everyone’s sink and explain how to brush your teeth properly? Prohibitively expensive.  Compulsory dental inspections for all? Maybe a little bit nanny-state, even for a committed state-interventionist like me. Free toothbrush, toothpaste, indoor plumbing MOT, instructional video and a 1 in 1000 chance to tongue-kiss Jessica Alba? May be more effective than giving away toothbrushes, but pushes the expense up to unsustainable levels and still will not reach mass effectiveness. Or maybe you could release an OER…
With the toothbrush model people get something actually useful (the toothbrush) which is reasonably cheap and also has a marketing and awareness raising function (if someone gave me a toothbrush I might think I may have bad teeth and need to brush more). It’s not going to improve dental hygiene in every case – but what will?
It’s like that with OER release – sure it’s not a perfect way to promote learning, but it’s pretty good, pretty cheap and even if it doesn’t work for everyone at least you’ve put something out there that someone can use. If David Wiley or anyone else has come up with a better way to promote learning at a higher level pretty well without a great deal of expense or effort and with significant additional benefits I’d love to help design a programme to implement it.
But more fundamentally I’m concerned with a growing confusion around the efficiency of innovation. Anya Kamenetz  has been looking for a Moore’s law corollary for higher education: computers and systems are getting faster and more effective, so therefore education should be getting cheaper. If education is not getting cheaper, we are using the wrong innovations so we should stop.
We know, as people actually putting innovation into practice, that this isn’t the case. There are countless studies that show that technology enhanced learning is more expensive than traditional models. But it can often be more effective in promoting learning. And can effectiveness lead to enhanced efficiency. Sometimes. Maybe. I don’t know, let’s test it.
Innovation is, essentially, a shot in the dark. We have a hypothesis, we may even have a model. But until we start doing stuff we don’t know what is actually going to happen. It’s easy to think “OK, this didn’t do what we expected, let’s bin it”, but that also throws away a lot of unexpected benefits. And the unexpected benefits are the interesting ones.
As a professional manager of programmes of innovation in eduction (stop sniggering, colleagues!) I’m actually more interested in stuff that doesn’t do what we expected but does do something else interesting. That’s where we learn about new ideas, and develop new hypotheses to test. If I just commissioned stuff that did exactly what I expected it would I’d be wasting everyone’s time.
But sometimes, most of the time, we have ideas that mostly work. They do demonstrative good, but they don’t chance the world like we’d hoped. They’re good for some people, but not everyone. So we build up, gradually, a flexible, varied set of tools and practices, with those annoying, non-standardised differences. The tools and processes start getting out there, start becoming a part of mainstream practice. Learners start expecting them.
And one day, it’s a whole new world outside. Explore it, but don’t forget your toothbrush.
The opinions expressed within this blog post are my own, and not those of my employer, or of projects or programmes I am responsible for. This post is available under a Creative Commons Attribution 3.0 Unported license.
Allow me to start with a (deliberately) controversial statement: “The resources themselves are the least valuable aspect of OER, and academic reuse is the least valuable aspect of these resources.“

I don’t propose to be able to defend that entirely – but it is indicative of the way my mind is moving after reading a wonderful post by Tony Bates yesterday, and continuing to reflect on David Wiley’s position and the findings of the UKOER Evaluation and Synthesis final report.
As someone who is involved in a major funded programme of OER release, I want to be doubly clear that I don’t think that this work has been a waste of time – or that the content created is without merit, or that current investigations into content reuse are worthless. Far from it. I’m more inclined to believe that that what we have gained from our work is not what many people have argue that we have gained. It is far, far, more.
(And the least valuable is still pretty damn valuable.)
(sorry about all the caveats – but I know I am at risk of being taken out of context here. Can you believe that some people read this blog purely to find things to complain about? Yes, really! )
OER is interesting – as a concept, as a process, and as an entity. 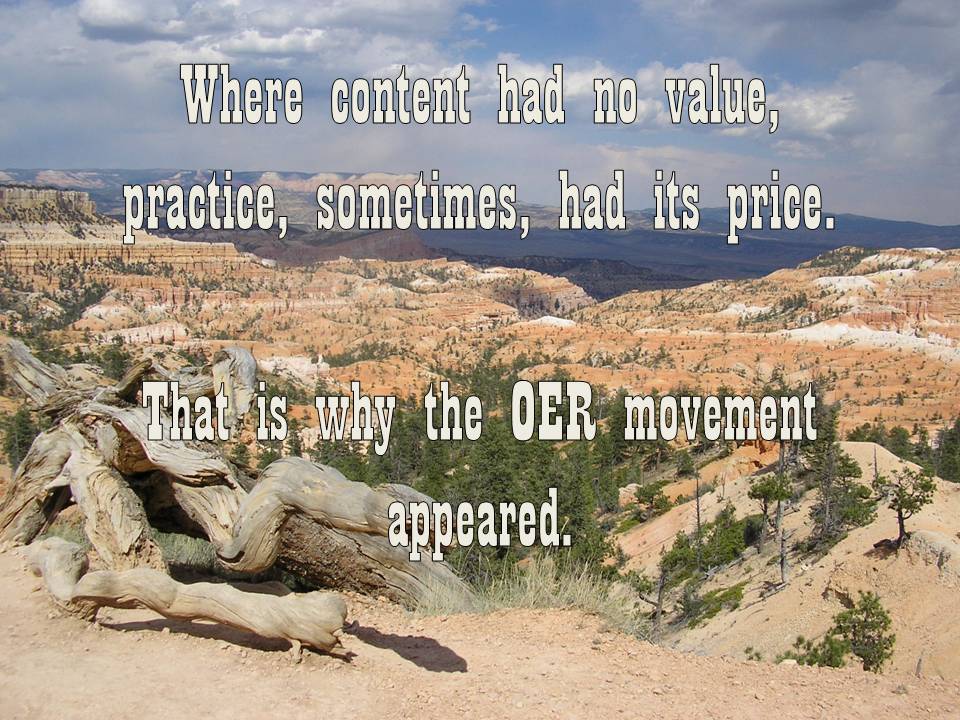