So, that Andrew McGettigan tweeted about the ThinkBelt today – Cedric Price’s mid-60s designs and concepts for a distributed, community-based, industrial university in the Potteries district (basically Greater Stoke-On-Trent).

Price was keen to design a campus that was adaptable and flexible to changing needs, but an institution that could offer a scale and intensity that could have an impact on the economy of the region and nation. He felt that:

“Because education beyond 18 is not accepted as a prime national industry, universities and colleges risk seeming to lack (a) recognisable social relevance, and (b) the capacity to initiate progress rather than attempt to catch up”

His designs relied heavily on temporary and mobile structures using industrial methods of production, and an internal transport network based on an existing, disused, railway line. He postulates that both age and length of study would be far more flexible than in traditional universities, and that computer-aided instruction and administration would have a central place to play. But it is clear that he sees the institution as an experiment in community and infrastructure regeneration rather than as a new form of learning and practice [although those with an interest in networked learning make find some of Price’s diagrams of interest] 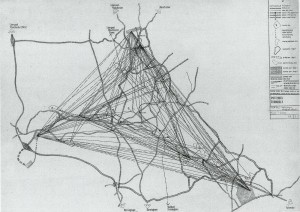 Which makes the geographical site of the proposed 100km2 campus very interesting for any student of the way that UK Higher Education has grown over the past 70 years.  Established as a university college in 1949, The University of Keele received a royal charter in 1962, conferring degree awarding powers as the second (after Sussex) of the 60s wave of new (“plate glass“) universities.

Initially a project of Alexander Dunlop Lindsay, an advocate of adult education and a fellow of Balliol College, Oxford, the University College of North Staffordshire (as it was then known, was founded to provide a wider and deeper education for the working man. As Lindsay himself said:

“If we are going to try and keep a democratic country and maintain understanding of one another, we have to send out people from our universities who can do the technical stuff and who at the same time have an understanding of political and social problems and of the values that lie behind them”

He worked closely with the local Workers Education Association, and eventually became the first Principal of the new organisation.

Keele, though predating the Robbins Report, could be said to have been the first to fully take on board the influence of paragraph 262 of the report, which states:

“A higher proportion should be receiving a broader education for their first degrees. This in itself calls for change. But if greatly increased numbers of undergraduates are to come into the universities in the future, change becomes essential. Indeed we regard such a change as a necessary condition for any large expansion of universities. Greatly increased numbers will create the opportunity to develop broader courses on a new and exciting scale, and we recommend that universities should make such development one of their primary aims.”

It claims to be the first UK institution to offer a modern Joint Honours Degree, and (until 1990) required that all undergraduates spent a foundation year studying the development of western civilisation before commencing their studies.

“Keele, the first (sic) post-war New University, has shown the slowest growth of all British universities (present student population approximately 1,000). It has little contact with the area and few faculties linked to local industries.” 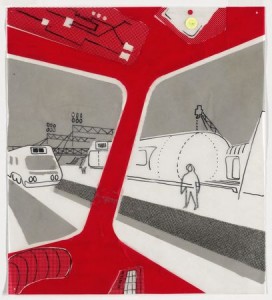 What we are seeing in these two parallel dreams of using university education to revitalise a stagnating industrial area is the difference between the industrial and academic perspective.

Both represent a change from current practice, but one is short term and focused on industry and short-term gain, the other on the wider concerns of civilisation. One arrives on an unknown landscape as a disruption, the other is based around existing structures and communities in the area. One takes little or no account of the small-scale but successful existence and work of the other.

It’s an age old story of the needs of commerce and the concerns of academia, which makes me think of Neal Stephenson’s Anathem world of Concents and Extramurous as perhaps the last great campus novel.

One thought on “The price of everything”