Like many people I’m disappointed by UC Berkeley’s decision to remove a range of “legacy” openly licensed online resources from public access YouTube and iTunes U, linked to from their webcast.berkeley.edu portal. This represents 20,000 audio or video recordings of lectures from between 2004-2015, which will be moved behind an institutional sign-in. And in particular I feel that comments like “Finally, moving our content behind authentication allows us to better protect instructor intellectual property from ‘pirates’ who have reused content for personal profit without consent” are a very bad look, no matter what the context.

Lecture recordings from on-campus provision are generally not great in quality or educational utility unless they have been specifically packaged for online/remote consumption. This process would likely involve exactly the kind of accommodations that are rightly required under the Americans with Disabilities Act (ADA) – at the very least transcription, and the deliberate use of teaching methods and resources suitable for remote learning. And consumer channels like YouTube and iTunes are hardly the best means of distributing a full package of learning materials. I should emphasise that this is good practice for supporting all learners.

A further issue with lecture capture is the likely use of copyrighted material within slides – for a “mass” operation like the one at Berkeley these are notoriously hard to police and check from recordings – as the slides were never provided alongside the recordings (a practice that would have gone at least some way towards addressing the ADA issue) even basic tools like reverse image search were unavailable.

The issue was brought to the attention of Berkeley and the Department of Justice by the National Association of the Deaf. A review of the case found that the complaint was a legitimate one, and that Berkeley (as a public body) were not meeting the requirements of the Americans With Disabilities Act, Title II.

Since 2015 Berkeley had already stopped posting new lecture recordings on the publicly available channels – this, coupled with the bizarre statement on piracy (how was the university losing money? why were they not enforcing the BY-NC-ND license they had chosen?) leads me to have a reasonable suspicion that the ADA judgement is just useful justification for a decision that had already been made.

However, Berkeley will continue to offer lecture capture as a service to enrolled students, and will to continue to share material via their EdX imprint, BerkeleyX – noting in the statement regarding the withdrawal of the legacy content that: “Berkeley will maintain its commitment to sharing content to the public through our partnership with EdX (edx.org). This free and accessible content includes a wide range of educational opportunities and topics from across higher ed.”

EdX, of course, famously had their own run in with ADA back in 2015. Despite claiming that they were not subject to ADA as they were not offering a “public accommodation” (and hell, deaf people hardly buy any certificates of completion…) the DoJ required that they sign an agreement to provide accessible accommodations. Note that they claim that this does not extend to course content, but the DoJ disagrees.

Current UC Berkley offerings on EdX do not meet ADA requirements. Though a decent transcript is offered, and this is downloadable, neither audio or text-to-speech versions of figures presented during videos are available. The example below is from the first video I encountered on “GG101x: The Science of Happiness“. 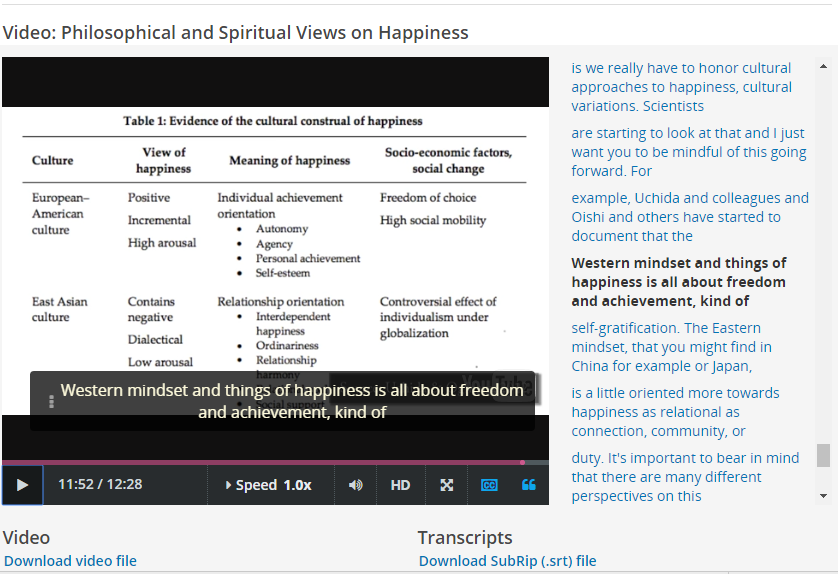 The table in the screen grab above (which I am claiming as “fair use”) is taken, unattributed (other than in the well-hidden Course Bibliography rendered in that legendarily accessible file format the PDF!) from Uchida, Y., & Ogihara, Y. (2012). Personal or interpersonal construal of happiness: A cultural psychological perspective. International Journal of Wellbeing, 2(4), 354-369. doi:10.5502/ijw.v2.i4.5 . The IJW make all articles available under an CC-BY-NC-ND license … a license that the legal team at Berkeley presumably know well 🙂

So at least one of Berkeley’s offerings on EdX does not meet the ADA requirements that EdX were required to meet, and also uses openly licensed content in breach of licensing terms (the attribution did not meet expected best practice, EdX is arguably a commercial concern and a derivative work was used). Apparently “UC Berkeley […] content has been discovered on for-profit websites, which use either a subscription fee or on-page advertising.” so I’m super glad I didn’t pay for that certificate…

For those interested in the legal background to the Berkeley decision, you could do worse than to read up on the way the 2015 EdX ruling offered notice that a website hosting learning content could be seen as a “place of education” for ADA/s502 purposes. I enjoyed this article from Cooley LLP and you might too.

And for those interested in the amazing history of this open education initiative at Berkeley, Audrey has you covered.