It transpired that we are dealing with a new category. Shirky argues that as information technology moves deeper and deeper into the world of human communication,  it allows users to use the data trails they create to develop meaningful insights into their lives and interactions.

Social media, in 2014, is more media than social. Every organisation has a person or a team, usually in the communications department, with a contractual remit to be “social”. There is a policy, not usually an entirely written one, that determines what constitutes “social” for other members of staff. Falling the wrong side of the line causes trouble. And believe that these lines are policed.

Just ask Thomas Docherty (a former Head of English at Warwick) about sharing and surveillance) . At a conference celebrating the republication of “Warwick University Limited” – a book describing the levels of political surveillance of academic staff and students in the 1970s were subject to – he noted that:

” Academics and students, if interested in material research and learning, have to work in the shadows, in clandestine fashion”

At least, had he been present at the conference, he would have noted this. I quote from a letter he sent whilst forbidden to enter the campus or make contact with his students.

As things stand, we know very little about his suspension, other than what has been released by the institution, which reassures us that his trenchant and freely expressed political views and membership of the Council for the Defence of British Universities are not the reason for this unusual punishment. At the time of publication Thomas Docherty is still suspended (some say indefinitely), and has been for 240 days.

Writing about her experiences at Worldviews2013, Melonie Fullick noted:

“Those starting out in academic life need to receive the message, loud and clear, that this kind of “public” work [new ways of engaging those outside of academia, primarily social media] is valued. They need to know that what they’re doing is a part of a larger project or movement, a more significant shift in the culture of academic institutions, and that it will be recognized as such. This will encourage them to do the work of engagement alongside other forms of work that currently take precedence in the prestige economy of academe.”

Docherty is hardly the only example of an outspoken academic who has been censured by an institution, and there are many far, far more telling tales of social media and the way it reacts to outspoken opinions. I just use the example as it is a local one. But far more insidious is the kinds of self-censorship that many of us must participate in. “No religion or politics”, as the old saying goes.

But our employers  (and ourselves) are not the only critical readers here. The networks themselves monitor and respond to the emotions and ideas we choose to express. The recent Facebook research on mood contagion, though welcome in open publication, reminds us just how much attention platforms pay to what we share – and, almost as a given, how valuable this information can be.

Witness also the controversy around the migration to Facebook Messenger on mobile platforms. The New York Times suggested the backlash was “part confusion, part mistrust“. Really, users have been spoiling for a fight with Facebook for a long time, a misunderstanding of how android permissions work (an application can record sound and take pictures, thus it needs to be allowed to use the microphone and camera…) feeds a building resentment of “move fast and break things”. Which itself has become the less quotable “move fast with stable infra“.

Couple this with the dense web of connections that can be built up around a single persona and we see the true cause of the Nymwars – far from improving online conversation, as google claimed when improving YouTube comments, drawing activity together across numerous sites raises the value of this data. As our picture becomes more complete, we can be better understood by those who wish to understand us.  To inform us. To sell to us. And to police us.

For the moment, an uneasy truce has been called. The real name is not required – the single identity remains. It seems hopelessly naive to think our real names could not be determined from our data if needed. By whoever feels the need to.

Compared to Facebook, we’ve always given twitter rather a free ride. But this too, with the introduction first of sponsored tweets and then of other tweets we may find interesting, becomes less about our decisions and more about our derived preferences. This is made explicit in the new onboarding process. Twitter in 2014 is a long way from twitter in 2007.

There has been the beginnings of a movement away from this total spectrum sharing – platforms like Snapchat and Whatsapp connect people with their friends directly – the idea of the network comes through forwarding and very selective sharing. Networks like Secret and Whisper do away with the idea of “whole-person” media – anonymous “macros” (words+image) are shared based on location only. 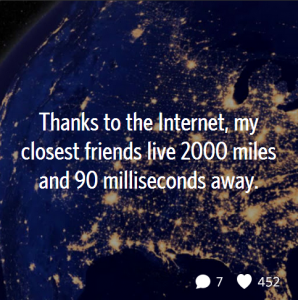 Though each will create a trail, these are not publicly viewable and are difficult to integrate with other trails. Shirky sees the creation of a trail as being something that empowers the user – “If there is a behavior that matters to them, they can see it and detail it to change that behavior” – a position that tends towards to the ChrisDancyfication of everything.

We use social media trails (and online activity, for that matter) like we use cloud chambers, to draw and assert links between events that are visible only in retrospect. It’s a big shift from sharing altruistically and to build connections, to sharing as a side-effect of self-monitoring.

I’ve rambled a little, but the central thesis I’m building here is: 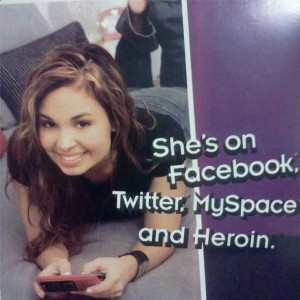 (To be fair, it’s really difficult to get off Facebook…)

Shirky’s position on the inexorable domination of the “social” clearly does not mesh with these trends – and this throws open the question of the place of social media in academia. Bluntly, should we be recommending to learners that they join any social network? And how should we be protecting and supporting those that choose to.

Social media has changed underneath us, and we need to respond to what social media is rather than what it was.

“We concede that there is some value to Twitter, but the social musing we did early on no longer fits. My feed (full of people I admire) is mostly just a loud, stupid, sad place. Basically: a mirror to the world we made that I don’t want to look into.”

I’d add, for the reasons above, “dehumanising” and “potentially dangerous”.

“Long long ago, in a web far far away, everything was like neat little home made bungalows stretched out on the open plain, under a giant expansive sky, where we wandered freely, exploring. Now we crowd among densely ad covered walkways of a shiny giant mall, never seeing the sky, nor the real earth, at whim to the places built for us.”

Tony Hirst is one of the most talented data journalists I know. In his own words:

But they’re not anymore. The upstarts started to build up their services, improve them, entrench them. And now they’re not something you can play with. The toys became enterprise warez and now you need professional tools to play with them. I used to hack around URLs and play with the result using a few lines of Javascript. Now I need credentials and heavyweight libraries, programming frameworks and tooling.”

After facing similar issues – with syndication, stability, permanence, advertising – Jim Groom (and others) are experimenting with forms of “social media” that are platform independent. Known, the webmention protocol, and similar emerging tools stem from the work of IndieWebCamp – a distributed team dedicated to providing a range of alternatives to corporate social media. They work to the following principles:

The first fits in nicely with ongoing work such as Reclaim Hosting, but for me the key aspect is control. One of the many nice aspects of these tools is that they are not year zero solutions – they start from the assumption that integration with other (commercial) networks will be key and that conversation there was as important as “native” comments. Compare Diaspora – which initially positioned itself as a direct alternative to existing networks (and is erroneously described in the press as a network where “content is impossible to remove“). With user-owned tools  you own what you share plus a copy of what is shared with you, and you have final control over all of this. Publish on your Own Site, Share Everywhere (P.O.S.S.E.)

Of course, this doesn’t lessen the risk of openly sharing online – these risks stem for the kind of corporations that employ us and that we entrust our data to. But it does help users keep control of what they do share. Which is a start.

But a start of what? We already seeing weak signals that young people (indeed all users) are drifting away from social networks, almost as fast as those who hope to talk to them are adopting the same networks. The quantified self is moving towards the qualified self, as users begin to understand and game the metrics that they are supposedly using for their own purposes.

People are more complex than activity trails and social networks suggest. The care taken to present facets (or even to perpetuate the illusion of an absence of facets). The ways they find to get answers out systems not set up to respond to questions.

Social media has changed. It’s the same tune, but a different song.

“The web is the most effective way there has ever been to connect people with different contexts and skills. Right now, a very small number of platforms control the form (and therefore, at least to an extent, the content) of those conversations. I think the web is richer if we all own our own sites – and Known is a simple, flexible platform to let people do that.”

In 2014 suspicion about the actions of the super-social media platforms has reached fever pitch. Are we approaching a proper social media backlash? What does this mean for teaching online, and do projects like “known” offer another way ?

“Your people I do not understand
And to you I will put an end
And you’ll never hear
Surf music again.”

(though the theme to Coronation Street, became “Third Stone From The Sun“, which became “Dance with the Devil“, which became”I’m Too Sexy“…)

[EDIT: 23/09/14 – Times Higher Education (£) are reporting that Docherty’s suspension will end on 29th September,  269 days after it commenced. Warwick University (“university of the year”) have not made any comment regarding the reason for the suspension, or why it has ended, but it is understood that the disciplinary process will still continue. Because obviously he hasn’t been punished enough.]